These leaves are an essential part of breeding and keeping freshwater fish and shrimps. Please choose your preferred quantity from the drop-down list located below. It may take up to 10 – 15 working days (except holidays and weekends) before this order is shipped. If there are any questions you have then please get in touch before you place an order.

If you’re an aquarist, you’ve probably heard of using Indian Almond Leaves (also known as Catappa Leaves) to make your aquarium water more natural and better for your fish. There are a few reasons why you might consider adding Indian almond leaves to your freshwater tank, including their medicinal properties and popular usage as an additional food source for small shrimp and fish. These leaves will also stain your water, giving your fish tank an unparalleled natural appearance that can really make your mini-ecosystem come to life.

Indian almond leaves come from the Terminalia catappa – a large tropical tree. The leaf of this tree is especially known for its ability to act as a natural medicine and aquarium water conditioner for betta fish and shrimp tanks when the leaf has emerged in water for extended periods of time. Indian almond leaves are said to help combat fungus and bacterial problems like fin rot and can further help prevent fish from getting stressed by mimicking the water they are naturally found in. The Terminalia catappa tree grows throughout the tropical regions of Asia, Australia, and Africa. As we’ll discuss later, the leaves fall from the tree and into the water. Tannins then leach out of the leaves into the water, adding hues of yellow and brown while lowering the pH. Indian almond leaves are usually harvested by simply picking them up off the ground leaf by leaf. After drying them properly, the leaves can then be added into the water or the tank.

When placed in water, Indian almond leaves slowly start to decompose. While this happens, the leaves turn the water a yellow or brown color by releasing tannins. These tannins gradually lower the pH of the water and are said to have antifungal and antibacterial properties, which comes in handy when you have a fish suffering from fin rot or when you’re raising vulnerable fry. This healing ability is actually a direct effect of what tannins are meant to do; in trees and plants, tannins are mainly stored in the bark and new leaves. The tannins have the ability to precipitate out important enzymes from bacteria and fungus, preventing the tree or plant from becoming infected. This would then likely bolster the ability of the fish to fight off infections as well when Indian almond leaves fall into the water and the tannins leach out.

The dark water tank appearance caused by these tannins is considered unsightly by some aquarists, but it actually mimics the natural habitat of many fish species! In fact, it’s said that a lot of fish feel less exposed when in dark water, which may help shyer fish gain more confidence that will bring them to the front of the tank. These properties alone definitely make using Indian almond leaves worth considering, but we’ll discuss even more benefits to adding some leaf litter to your tank later! Some aquarium keepers like their tank really full of tannins, but luckily, the color is easy to regulate with regular maintenance and activated carbon if the water gets too dark for your liking!

Many people use Indian almond leaves in their betta fish or shrimp tank, but these leaves can be used in many situations for other fish as well:

There are a few different ways to use Indian almond leaves in your tank; the easiest way is to just place a leaf or two in the tank at first and wait for them to do their job. The more leaves you add, the more tannins will be released and the darker the water will get; you can tear the leaves up if you want the tannins to release more quickly. Once the Indian almond leaves start decomposing, you can take them out or replace them, but it’s also fine to wait for them to completely decompose on their own. Shrimp and fry will actually appreciate it if you don’t remove the leaves because, as mentioned earlier, they feed on the decomposing remains; no piece of a leaf will go to waste no matter how small!

What if I add too many Indian almond leaves into my fish tank? It really isn’t likely that you’ll end up using too many Indian almond leaves in your tank; the only way this could happen is if you use an absurd amount of leaves and your pH gets so low that it starts to affect your overall water quality. And even that is very unlikely to happen if you are keeping count of the leaves in your tank! It is usually recommended to only use one Indian almond leaf per 38 – 40 L, however, you should be safe with adding another leaf if you didn’t get the desired effect with just one.

Otherwise, your problem comes down to only the aesthetics of the water in your tank. The more leaves you use and the longer you keep them in your tank, the darker your water will get. However, if you accidentally add too many leaves at once or too much Indian almond leaf extract, this can be fixed by simply doing partial water changes and using and regularly replacing activated carbon. Activated carbon will fill up with the tannins over time, so you may need to replace it more regularly if you’re really wanting to clear up the water in your tank.

If you choose to use Indian almond leaves in your tank, you won’t be disappointed. These leaves will help keep your fish and invertebrates healthy and fed. Your water will also be stained beautiful hues of yellows and browns that would naturally be found in the areas where your fish and/or invertebrates are from. Using Indian almond leaves is also a good and simple alternative to lowering water pH instead of using chemicals that can easily be over- or underdosed. If worse comes to worst and you hate the color of the water, you can always lessen the effect of the Indian almond leaves by using and regularly replacing your activated carbon. 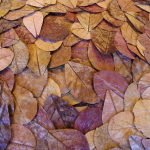